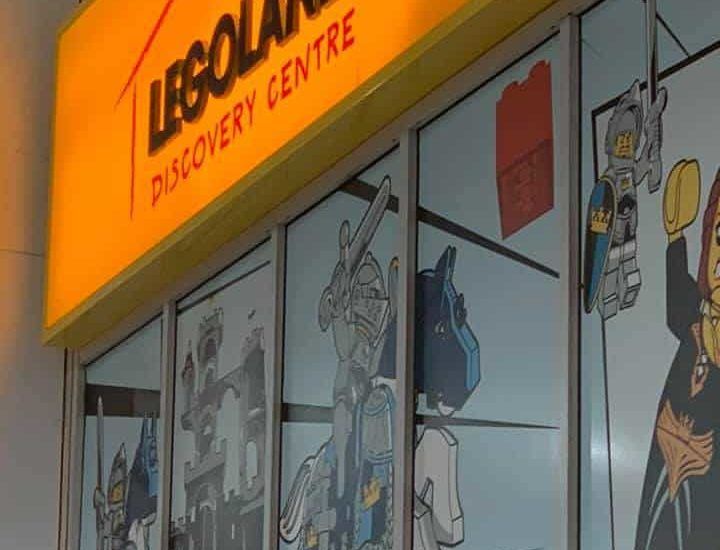 With it being the last day of half term, we decided to take our four year old to Legoland at Manchester Trafford Centre.

He loves playing with Lego and was looking forward to going.

So we queued, mostly outside whilst it was cold and raining and eventually got into the warm. Then, that’s when the queuing really started!

We got to the counter desk and got our wristbands and guides and stuff like that and then joined another queue.

This seemed to take ages and as we got further through the queue, we found out why – bloody photographs!

It seems that you cannot go to any attraction in the UK these days without having to spend a fortune on crap photos.

Would you like to be transported to the Lego-verse and surf on a Lego piece of wood above New York City?

My wife, always willing to spend loads of money, decided that of course we needed to add a crap Lego photo to our other collection of crap photos from other days out.

At this point, we had to get into a lift up to the next floor – but of course, there was a queue for the lift which seemed to take forever – the reason for this would come to light shortly.

The reason was that there were so many people on the floor above, people could not get out of the lift! So it was not coming back down to get more people!

This was because a large number of people were held in what can only be described as a holding pen. We finally got up in the lift and then waited to get out of the lift, then waited about 15 minutes in the boiling hot holding pen – which had lots of flashing lights (great for migraine suffers…) and eventually we were allowed into the main area.

The first thing we did was head to the cafe as we were dying for a drink after being held in the holding pen for so long.

What we found was a basic small shop with some tables outside, but fair enough, a bottle of water each and we were ready for a day of fun finally.

Then we went into a larger area where there were some various Lego men, women, cars and buildings.

Within about 20 minutes we had gone around all the parts of this particular area and walked over to the next area.

The next area we walked into was the Lego Space area. I was excited about this next area, I was thinking about space ships, the moon, Star Trek and all that kind of stuff.

How disappointed I was….

The room was about the size of my living room with a Space Mission panel which wasn’t even made of Lego:

Then there was a space shuttle which was not too bad, improving I thought…

There was then a Buzz Lightyear Lego man and then there was a door to a hallway. One way lead to the toilets, the other lead to the shop.

That was it. That is was £80 bought us. We queued longer than we were actually in the exhibition areas. Now we found ourselves in the over priced shop.

After picking up more tat we didn’t need, the wife got into the shop queue and demanded I hand over my wallet.

I went outside and had a little cry to myself.

We did take photos when we were there so below is a small gallery of what you can expect if you visit Legoland Manchester.

Although I was very disappointed, my four year old was happy so I suppose that is all that matters in the end. If there is any advice I could offer it would be to not go in school holidays or weekends if you can avoid it. Also don’t expect too much for your money as you are not getting a lot for your money and it is very expensive in the cafe and the exit shop and don’t even get me started on the photo scams.

Don’t forget to check out my YouTube channel here where it has pretty poor videos of boring stuff and a few dashcam videos that I upload when I can be bothered.

But, go take a look and hit the Subscribe button!

Also, don’t forget that I’m on Instagram – I use that a bit more regularly than I blog, so always worth a follow and a nose.

If you want to keep up to date with ToneTravels including a load of crap about Villa, days out, travelling around the UK and work trips, get following me on my social media channels:

No comments yet
Days Out Halloween Legoland Manchester Reviews Travel